As discussed in Part 1 of this series, one type of privacy decision users have to make is which app to install. Typically, when choosing an app, users pick from the first few apps that come up when they search a keyword in their app store, so the app store plays a big roll in which apps users download.

Unfortunately, most major app stores don’t help users make this decision in a privacy-minded way. Because these stores don’t factor privacy into their ranking, the top few search results probably aren’t the most privacy-friendly, so users are already picking from a problematic pool. Furthermore, users rely on information in the app store to choose from within that limited pool, and most app stores offer very little in the way of privacy information. 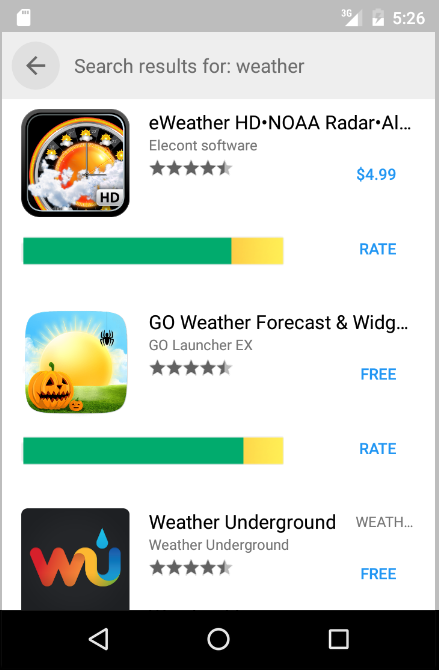 We’ve built a marketplace, the PerMission Store, that tackles both the ranking and user information concerns by adding one key component: permission-specific ratings. These are user ratings, much like the star ratings in the Google Play store, but they are specifically about an app’s permissions.1

To help users find more privacy friendly apps, the privacy ratings are incorporated into the PerMission Store’s ranking mechanism, so that apps with better privacy scores are more likely to appear in the top hits for a given search. (We also consider factors like the star rating in our ranking, so users are still getting useful apps.) So users are selecting from a more privacy-friendly pool of apps right off the bat.

Apps’ privacy ratings are also displayed in an easy-to-understand way, alongside other basic information like star rating and developer. This makes it straightforward for users to consider privacy along with other key factors when deciding which app to install.

Incorporating privacy into the store itself makes it so that choosing privacy-friendly apps is as a natural as choosing useful apps.

The PerMission Store is currently available as an Android app and can be found on Google Play.

A more detailed discussion of the PerMission Store can be found in Section 3.1 of our paper.

1: As a bootstrapping mechanism, we’ve collected rating for a couple thousand apps from Mechanical Turk. Ultimately, though, we expect the ratings to come from in-the-wild users.