What Help Do Students Seek in TA Office Hours?

In computer science, a large number of students get help from teaching assistants (TAs). A great deal of their real education happens in these hours. While TA hours are an excellent resource, they are also rather opaque to the instructors, who do not really know what happens in them.

How do we construct a mechanism to study what happens in hours? It’s actually not obvious at all:

What do we instead want? A process that is non-intrusive, lightweight, and yet informative. We have to also give up on perfect knowledge, and focus on information that is actually useful to the instructor.

Part of the problem is that we as a community lack a systematic method to help students in the first place. If students have no structure to how they approach help-seeking, then it’s hard to find patterns and make sense of what they actually do.

However, this is exactly a problem that the How to Design Programs Design Recipe was addressed to solve. It provides a systematic way for students to structure their problem-solving and help-seeking. TAs are instructed to focus on the steps of the Design Recipe in order, not addressing later steps until students have successfully completed the earlier ones. This provides an “early warning” diagnostic, addressing root causes rather than their (far-removed) manifestations.

Therefore, we decided to use the Design Recipe steps as a lens for obtaining insight into TA hours. We argue that this provides a preliminary tool that addresses our needs: it is lightweight, non-intrusive, and yet useful to the instructor. Read the paper to learn more!

When faced with an unfamiliar programming problem, undergraduate computer science students all-too-often begin their implementations with an incomplete understanding of what the problem is asking, and may not realize until far into their development process (if at all) that they have solved the wrong problem. At best, a student realizes their mistake, suffers from some frustration, and is able to correct it before the final submission deadline. At worst, they might not realize their mistake until they receive feedback on their final submission—depriving them of the intended learning goal of the assignment.

Educators must therefore provide students with some mechanism by which students can evaluate their own understanding of a problem—before they waste time implementing some misconceived variation of that problem. To this end, we provide students with Examplar: an IDE for writing input–output examples that provides on-demand feedback on whether the examples are:

For a demonstration, watch this brief video!

With its gamification, we believed students would find Examplar compelling to use. Moreover, we believed its feedback would be helpful. Both of these hypotheses were confirmed. We found that students used Examplar extensively—even when they were not required to use it, and even for assignments for which they were not required to submit test cases. The quality of students’ final submissions generally improved over previous years, too. For more information, read the full paper here!

The Hidden Perils of Automated Assessment

We routinely rely on automated assessment to evaluate our students’ work on programming assignments. In principle, these techniques improve the scalability and reproducibility of our assessments. In actuality, these techniques may make it incredibly easy to perform flawed assessments at scale, with virtually no feedback to warn the instructor. Not only does this affect students, it can also affect the reliability of research that uses it (e.g., that correlates against assessment scores).

To Test a Test Suite

The initial object of our study was simply to evaluate the quality of student test suites. However, as we began to perform our measurements, we wondered how stable they were, and started to use different methods to evaluate stability.

There are basically two ways of doing this in the literature; let’s see how they fare.

The second method does this by taking every test suite you have (i.e., both the instructor’s and the students’), running them all against a known-correct implementation, and gluing all the ones that pass it into one big mega test suite that is used to establish ground truth.

A Tale of Two Assessments

We applied each model in turn to classify 38 student implementations and a handful of specially crafted ones (both correct and faulty, in case the student submissions were skewed heavily towards faultiness or correctness), then computed the true-positive and true-negative rate for each student’s test suite.

Judging by this plot, students did astoundingly well at catching buggy implementations. Their success at identifying correct implementations was more varied, but still pretty good.

Judging by this plot, students performed astoundingly poorly at detecting buggy implementations, but quite well at identifying correct ones.

So which is it? Do students miss half of all buggy implementations, or are they actually astoundingly good? In actuality: neither. These strikingly divergent analysis outcomes are produced by fundamental, theoretical flaws in how these models classify implementations.

We were alarmed to find that these theoretical flaws, to varying degrees, affected the assessments of every assignment we evaluated. Neither model provides any indication to warn instructors when these flaws are impacting their assessments. For more information about these perils, see our paper, in which we present a technique for instructors and researchers that detects and protects against them.

How do you learn a new language? Do you simply read its reference manual, and then you’re good to go? Or do you also explore the language, trying things out by hand to see how they behave?

This skill—learning about something by poking at it—is frequently used but almost never taught. However, we have tried to teach it via what we dub mystery languages, and this post is about how we went about it.

A mystery language is exactly what it sounds like: a programming language whose behavior is a mystery. Each assignment comes with some vague documentation, and an editor in which you can write programs. However, when you run a program it will produce multiple answers! This is because there are actually multiple languages, with the same syntax but different semantics. The answers you get are the results of running your program in all of the different languages. The goal of the assignment is to find programs that tell the languages apart.

As an example, maybe the languages have the syntax a[i], and the documentation says that this “accesses an array a at index i”. That totally specifies the behavior of this syntax, right?

(EDIT: Specifically, Python wraps negative indices that are smaller than the length of the array.)

Students engage with the mystery languages in three ways:

This example is somewhat superficial (the real mystery languages mostly use more significant features than array access), but you get the idea: every aspect of a programming language comes with many possible designs, and the mystery languages have students explore them first-hand.

We hope to teach a number of skills through mystery languages:

If you want to use Mystery Languages in your course, email us and we’ll help you get started!

You can learn more about mystery languages in our SNAPL’17 paper, or dive in and try them yourself (see the assignments prefixed with “ML:”).

No one should have to see the insides of your macros. Yet type errors often reveal them. For example, here is a very simple and macro in Rust (of course you should just use && instead, but we’ll use this as a simple working example): 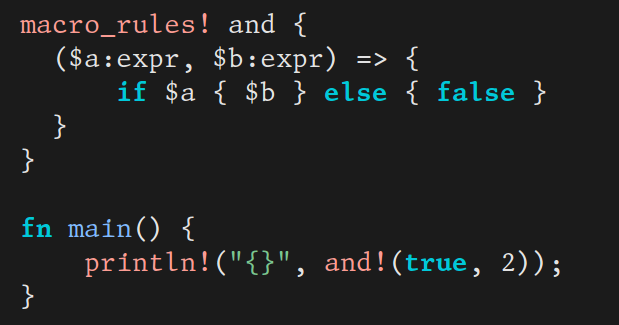 and the type error message you get if you misuse it:

You can see that it shows you the definition of this macro. In this case it’s not so bad, but other macros can get messy, and you might not want to see their guts. Plus in principle, a type error should only show the erronous code, not correct code that it happend to call. You wouldn’t be very happy with a type checker that sometimes threw an error deep in the body of a (type correct) library function that you called, just because you used it the wrong way. Why put up with one that does the same thing for macros?

The reason Rust does is that that it does not know the type of and. As a result, it can only type check after and has been desugared (a.k.a., expanded), and so the error occurs in the desugared code.

But what if Rust could automatically infer a type rule for checking and, using only the its definition? Then the error could be found in the original program that you wrote (rather than its expansion), and presented as such. This is exactly what we did—albeit for simpler type systems than Rust’s—in our recent PLDI’18 paper Inferring Type Rules for Syntactic Sugar.

We call this process resugaring type rules; akin to our previous work on resugaring evaluation steps and resugaring scope rules. Let’s walk through the resugaring of a type rule for and:

We want to automatically derive a type rule for and, and we want it to be correct. But what does it mean for it to be correct? Well, the meaning of and is defined by its desugaring: α and β is synonymous with if α then β else false. Thus they should have the same type (here the fancy D means “desugar”):

How can we achieve this? The most straightforward to do is to capture the iff with two type rules, one for the forward implication, and one for the reverse:

The first type rule is useful because it says how to type check and in terms of its desugaring. For example, here’s a derivation that true and false has type Bool:

However, while this t-and→ rule is accurate, it’s not the canonical type rule for and that you’d expect. And worse, it mentions if, so it’s leaking the implementation of the macro!

However, we can automatically construct a better type rule. The trick is to look at a more general derivation. Here’s a generic type derivation for any term α and β:

And so we’ve inferred the canonical type rule for and! Notice that (i) it doesn’t mention if at all, so it’s not leaking the inside of the macro, and (ii) it’s guaranteed to be correct, so it’s a good starting point for fixing up a type system to present errors at the right level of abstraction. This was a simple example for illustrative purposes, but we’ve tested the approach on a variety of sugars and type systems.

You can read more in our paper, or play with the implementation.